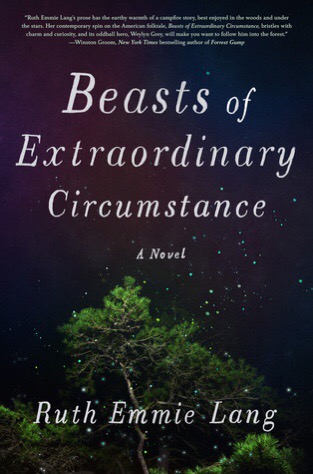 “A wholly original and superbly crafted work of art, Beasts of Extraordinary Circumstance is a masterpiece of the imagination.” —Lori Nelson Spielman, New York Times bestselling author of The Life List and Sweet Forgiveness

“Charlotte’s Web for grown-ups who, like Weylyn Grey, have their own stories of being different, feared, brave, and loved.” —Mo Daviau, author of Every Anxious Wave

Orphaned, raised by wolves, and the proud owner of a horned pig named Merlin, Weylyn Grey knew he wasn’t like other people. But when he single-handedly stopped that tornado on a stormy Christmas day in Oklahoma, he realized just how different he actually was.

That tornado was the first of many strange events that seem to follow Weylyn from town to town, although he doesn’t like to take credit. As amazing as these powers may appear, they tend to manifest themselves at inopportune times and places. From freak storms to trees that appear to grow over night, Weylyn’s unique abilities are a curiosity at best and at worst, a danger to himself and the woman he loves. But Mary doesn’t care. Since Weylyn saved her from an angry wolf on her eleventh birthday, she’s known that a relationship with him isn’t without its risks, but as anyone who’s met Weylyn will tell you, once he wanders into your life, you’ll wish he’d never leave.

Beasts of Extraordinary Circumstance tells the story of Weylyn Grey’s life from the perspectives of the people who knew him, loved him, and even a few who thought he was just plain weird. Although he doesn’t stay in any of their lives for long, he leaves each of them with a story to tell. Stories about a boy who lives with wolves, great storms that evaporate into thin air, fireflies that make phosphorescent honey, and a house filled with spider webs and the strange man who inhabits it.

There is one story, however, that Weylyn wishes he could change: his own. But first he has to muster enough courage to knock on Mary’s front door.

In this warm debut novel, Ruth Emmie Lang teaches us about adventure and love in a beautifully written story full of nature and wonder.

Weylyn is orphaned at a very young age. Through some strange circumstances he is raised by wolves. YES WOLVES! Right there… I would usually stop and put the book down. That would be it for me. But something about Weylyn kept me reading. He is smart, funny and especially quirky. I was riveted to his story and the many people affected by him.

There are so many fabulous characters in this read. One of the best besides Weylyn is his foster sister, Lydia. I loved her attitude and her smart mouth. She and Weylyn are attached at the hip and she protects him through thick and thin. Then enters Merlin. The pig! Yes, a real pig. He is absolutely adorable. I now officially want a pig!

This novel is narrated in many voices. It is told by people touched by Weylyn in some form or fashion. Here are just a few of the people with a tale about Weylyn. Mary is a friend and eventually runs away from home to live in the wolf pack. Lydia is his foster sister. Meg Lowery is his teacher and eventually his adopted mother. There are several more but these are my favorites. These people touch Weylyn’s life and help guide him to be…well to live in a shack in the woods. JUST READ THE NOVEL!

This is an unusual and unique story! And to tell you the truth, I am shocked that I enjoyed it as well as I did. It is described as fantasy, which is one of my least favorite genres. However, it did not read like a fantasy novel at all. Now, it does have a little magic in it. But that just adds to the charm of Weylyn and, of course Merlin!

Oh and for the record…there is not a Little Turtle, Mississippi. There is an Alligator, Mississippi. 😂. You must read the book!!!!

Thanks to St. Martins Press for an advanced reader’s copy of the amazing read.