A charming, irresistible debut novel set in London during World War II about an adventurous young woman who becomes a secret advice columnist—a warm, funny, and enormously moving story for fans of The Guernsey Literary and Potato Peel Pie Society and Lilac Girls.

London 1940, bombs are falling. Emmy Lake is Doing Her Bit for the war effort, volunteering as a telephone operator with the Auxiliary Fire Services. When Emmy sees an advertisement for a job at the London Evening Chronicle, her dreams of becoming a Lady War Correspondent seem suddenly achievable. But the job turns out to be typist to the fierce and renowned advice columnist, Henrietta Bird. Emmy is disappointed, but gamely bucks up and buckles down.

Mrs Bird is very clear: Any letters containing Unpleasantness—must go straight in the bin. But when Emmy reads poignant letters from women who are lonely, may have Gone Too Far with the wrong men and found themselves in trouble, or who can’t bear to let their children be evacuated, she is unable to resist responding. As the German planes make their nightly raids, and London picks up the smoldering pieces each morning, Emmy secretly begins to write letters back to the women of all ages who have spilled out their troubles.

Prepare to fall head over heels with Emmy and her best friend, Bunty, who are spirited and gutsy, even in the face of events that bring a terrible blow. As the bombs continue to fall, the irrepressible Emmy keeps writing, and readers are transformed by AJ Pearce’s hilarious, heartwarming, and enormously moving tale of friendship, the kindness of strangers, and ordinary people in an extraordinary time.

Emmy responds to an add for a job at a newspaper. She wants to be a war correspondent.  Little does she know, the job is as far a way from the war as can be.  She is an assistant to Mrs. Bird.  Mrs. Bird is an advice columnist.  Mrs. Bird is very strict and meticulous.  She only answers certain letters.  The rest she refuses to even consider. And she has a LONG list of taboo topics. Well! Emmy takes it on herself to answer some of these letters. You can guesss where this leads.

I love Emmy’s rebellious nature. She has plans to be good but then she just can’t. She tickles me to death.  I love when she gives herself “a stern talking to!”  She is a character after my own heart.  She is not perfect.  She is perfectly flawed!

This read is humorous but it has its shares of tragedy as well.  Bunty and her fiancé are caught in a bombing and this will rip your heart out.  Would I put this in the same class as The Lilac Girls? No. But, it is a very good read. Actually it is a great mix of humor and tragedy.  You will be laughing one minute and crying the next.  So LOOK OUT!

I received this novel from the publisher via Netgalley for a honest review. 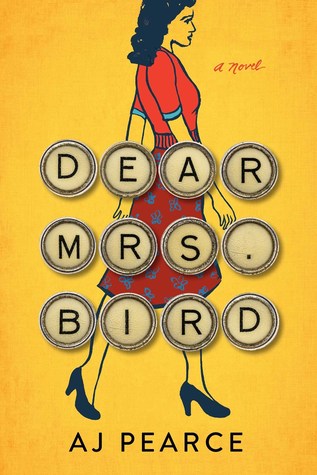 I am an avid reader and paper crafter. I am a mom of 2 children, 5 dogs and 1 cat. I am a huge St. Louis Cardinals Fan
View all posts by fredreeca →
This entry was posted in Reviews and tagged fiction, kindle, nook, review. Bookmark the permalink.