The Guest Room by Chris Bohjalian 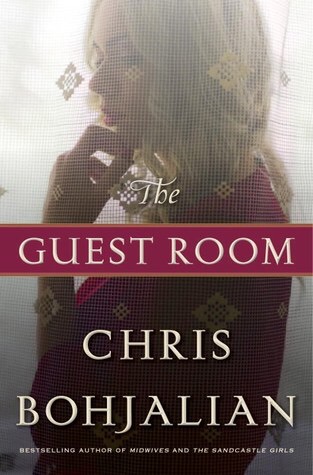 When Richard Chapman offers to host his younger brother’s bachelor party, he expects a certain amount of debauchery. He sends his wife, Kristin, and young daughter off to his mother-in-law’s for the weekend, and he opens his Westchester home to his brother’s friends and their hired entertainment. What he does not expect is this: bacchanalian drunkenness, a dangerously intimate moment in his guest bedroom, and two naked women stabbing and killing their Russian bodyguards before driving off into the night. In the aftermath, Richard’s life rapidly spirals into a nightmare. The police throw him out of his home, now a crime scene; his investment banking firm puts him on indefinite leave; and his wife finds herself unable to forgive him for the moment he shared with a dark-haired girl in the guest room. But the dark-haired girl, Alexandra, faces a much graver danger. In one breathless, violent night, she is free, running to escape the police who will arrest her and the gangsters who will kill her in a heartbeat. A captivating, chilling story about shame and scandal, The Guest Room is a riveting novel from one of our greatest storytellers.

Richard hosts a bachelor party for his brother.  It turns into a night of debauchery and murder. The fallout from this evening is never ending.

This novel has so many levels and so many layers it is so hard to put down. One minute you are at a naughty bachelor party, the next you are envolved with Russians and sex slavery, not to mention, the repercussions on a marriage, job and family during the days after the party.

This story just kept getting deeper and more envolved the more I read. Chris Bohjalian has not dissappointed me yet. I am amazed at his talent of weaving a tale.

There is one part that should be reworked and I usually never just pick one, but this one irked me. When Richard is telling his wife on the phone about the murders, she repeats verbatim everything he is saying to her. That is not a conversation a wife would have with a husband. She would be yelling WHAT!!!! Or OH MY GOD!! She would not be repeating what he said. There would probably be expletives.  I think this is where I began not to like her. She is a little bit of whiner throughout this story.  However, she definitely redeems herself at the end. And the ending caught me by surprise. I never expected it. Just made the story better…if even possible.

I am an avid reader and paper crafter. I am a mom of 2 children, 5 dogs and 1 cat. I am a huge St. Louis Cardinals Fan
View all posts by fredreeca →
This entry was posted in Reviews and tagged ficrion, kindle, nook, reviews. Bookmark the permalink.

4 Responses to The Guest Room by Chris Bohjalian