Meeting him was easy. It was knowing him that burned bone.

What do you do when you discover you are not the person you thought you were?

Paul Shepherd is dangerous. He drops into Jenna’s life like an asteroid slamming into an ocean. Willful and exhausting, he stirs feelings that make her challenge the boundaries that have kept her safe – and bored.

Relentless and determined, he needs Jenna with a desperation she does not understand. Jenna discovers that, although she can try to hide from Paul, she cannot hide from herself.

But he is married…

Set in Belfast and the beautiful counties of Down and Donegal in Ireland, this is a story of irrevocable change, tragedy and indestructable love.

“Maker of Footprints is a beautifully written novel about love, desire, relationships and passion…The book reminds me of Wuthering Heights crossed with Jodie Picoult. It was unputdownable. You can feel the passion, almost smell the sweat and tears and the descriptions of the beautiful beaches of Donegal has you licking the salt off your lips. It’s a treat for the senses. A must read! 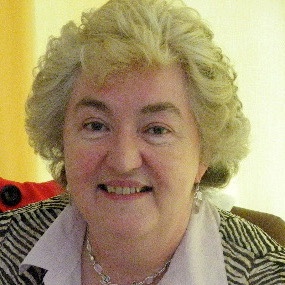 I was born in west Cork in southern Ireland and as a young child lived in various counties the length and breadth of the country as my father, a Methodist minister, was moved around. Most of my life however, has been lived in Northern Ireland.

I attended Queen’s University, Belfast, and apart from managing to graduate against all my expectations, one of my best experiences was reading my poetry to an audience that included Seamus Heaney.

Marriage and children silenced the writer by the effective weapon of exhaustion. Then one day I blew all my spare cash on a typewriter (anyone else remember those?!). I was going to WRITE! From then on I wrote and published articles and short stories and researched and wrote a biography of Irish Gaelic League activist Alice Milligan. It is still in print – https://amzn.to/2ZpYt9z.

I have lived my entire adult life through the Troubles in Northern Ireland and this has influenced my outlook on life. Experiences such as, amongst many, being woken by a bomb exploding close by and wondering if you have just heard a death does tend to send the mind down paths it might otherwise not travel.

I have won prizes for both fiction and non-fiction, and have written many articles for both local and national publications. I and my husband Norman founded the publishing stable ColourpointCreative Ltd, which is now owned and managed by our two sons.

Maker of Footprints is my first published novel.

“I’ve always felt that.” She walked away, embarrassed now. “Sounds silly, doesn’t it?”

“It sounds about right.”

She turned and smiled, her arms folded against the cold. The light was fading rapidly and the air was damp on her face.

“I think you took some good pictures in there,” she said.

“You weren’t the worst group I’ve had to deal with.”

“You managed to get even Luke to cooperate.”

He walked past her to examine the bedstead. He gave it a push with his foot. “When you’re taking family portraits, there’s always one person who’s the key. If you can identify that person and make a connection, you’ve got a great portrait.”

“And Luke was the key?” said Jenna. “Mum and Dad think he’s the problem.”

He turned and raised a finger playfully. “Ah! But the problem is often the key.”

“Then think in riddles!”

“Because it’s the way to the answers. Riddles make the world go round.”

“I thought love did that.”

“The biggest riddle of all.” Suddenly he kicked the bedstead, sending it crashing onto its side. “Why is there always a bloody iron bedstead? Can’t people leave anything to rot without putting a bloody bedstead in it?”

“Anyway,” said Jenna calmly, watching the rusty springs shudder to rest, “you weren’t just making a connection with Luke. You were talking about something you’ve experienced yourself. Something true.”

He said, almost carelessly, “The truth is the only connection worth making.” His feet scuffed the loose floor as he turned again. “Did you go away to university?”

She shrugged. “I don’t know. It was easier, I suppose.”

He folded his arms and put his head on one side. “And unlike Luke, you always do what yourtold.”

She bristled. There was mockery in his tone. “No, I don’t!”

“Yes, you do.” He nodded towards the house. “I didn’t even have to look at you in there. Within minutes of seeing the four of you together, I knew who would be the hardest subject and who would be no trouble at all, because she’s a good girl and she always does what she’s told, sometimes even before she’s told it.”

A faint scrabbling of raindrops on the tin roof turned into a deafening batter as the rain began in earnest.

Jenna raised her voice, annoyance pawing at her. “You don’t know me at all. How can you say that?”

He cocked his head. “No, I don’t know you. Who are you? Apart from my brother’s girlfriend?”

This was ridiculous. “I’m Jenna!”

He was relentless, his eyes intense. “Who’s Jenna?”

“Me,” she said, the sound of the rain drumming into her skull.

She stopped. Truth is the only connection worth making, he had said. She looked up at the rust and cobwebs of the tin roof above. The rain pounded the roof as she turned her eyes back to him, her own words surprising her. “I don’t know. I don’t know who I am.”

He planted his feet apart, stood immovably in front of her. “Are you good? Are you bad?”

“I’m not bad.” The rain was beating louder, a breeze wrapping damp and cold around them, weaving through the gaping holes in the building.

She raised her voice again and made a fist, low at her side. “I don’t know!”

“Only you know that.”

He stopped. Then his shoulders dropped and he spread his hands. “Well, well. It’s an uncertain world we live in. Isn’t it?”

He walked back to the window and leaned his shoulder against the worn wood. Raindrops flew through the opening, dappling his coat. Jenna felt as if she had been rolled across thorns. Who the hell was he, anyway? Apart from her boyfriend’s brother? She took a deep breath.

“It’s an uncertain world all right.” She looked at the back of his head, stilled as he watched the waves of rain sweep the field outside. “But that’s OK, Paul,” she said suddenly, unsure why the sight of his hair ruffling in the wind should make her want to say this to him. “It’s OK not to know.”

He turned slowly and faced her. Even against the light, she could see the sadness in his shadowed eyes. “No it’s not,” he said. “It’s not OK at all.”