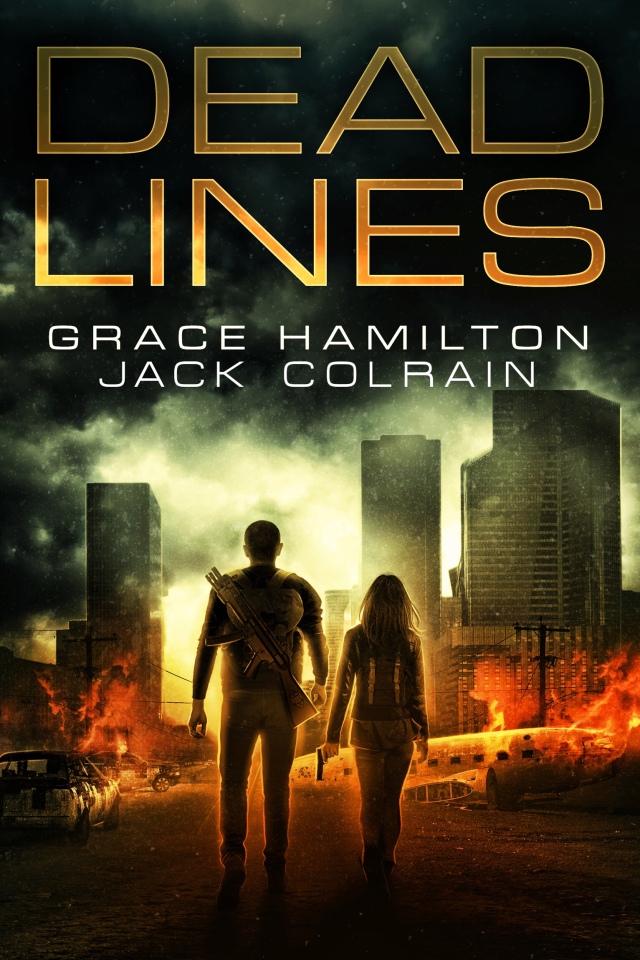 911 operator Jim Parker wants—more than anything—to be useful again. When a catastrophic EMP strikes, and he’s the last person a kidnapped girl speaks to before the lines go dead, he knows he can’t let her down. Especially when the circumstances are so similar to his own daughter’s disappearance. With the world falling apart around him, he wants to do nothing more than retreat to his prepper cabin. But with a fresh lead on his daughter, and another innocent girl’s life on the line, the disgraced cop will do everything in his power to track them down.

Finn Meyers has lost Ava, her best, and only, friend in the world, but she knows where the

missing young woman might be—and perhaps Parker’s long lost daughter. Now, Parker must form an uneasy alliance and tackle his own internal demons as the two begin a perilous journey that will take them to the headquarters of a mysterious cult in Indiana.

But what they find along the way will shatter all their preconceptions—and threaten the world as they know it. Can a has-been and a has-not save the innocent, and stop a disaster from happening?

Grace Hamilton wasn’t always a prepper. But after being stuck in a mountain cabin for 6 days following a flash flood, she decided she never wanted to feel so powerless or have to send her kids to bed hungry again. Now she lives the prepper lifestyle and knows that if SHTF or TEOTWAWKI, she’ll be ready to help protect and provide for her family.

Combine this survivalist mentality with a vivid imagination (as well as a slightly unhealthy day dreaming habit) and you get a prepper fiction author. Grace spends her days thinking about the worst possible survival situations that a person could be thrown into, then throwing her characters into these nightmares while trying to figure out “What SHOULD you do in this situation”

It’s her wish that through her characters, you will get to experience what life will be like and

essentially learn from their mistakes and experiences.

Grace is a proud momma-bear to four kids and wife to a wonderful husband.

James Parker rubbed the sandy grit out of his eyes and stared at the monitors in front of him. Three screens—low light, supposedly easy on the eyes—sat at his station along with a computer, telephone, and emergency communications radio. But he was suffering from a hangover headache pounding dully behind his temples, and it hurt to use his eyes, even in such dim lighting.

His hand, big and calloused, massaged a five o’clock shadow rapidly heading towards full-on homeless scruff. He wanted another Vicodin, but had promised himself not to take too many at work. Mostly, he kept that promise. Mostly.

The light in the room was muted, more a soft ambience with the illumination designed to be easy on an operator’s eyes, and the soft glow of computers reflected like silvered mirrors from each station. From all around him, the white noise of the call center was a light murmur of background conversations punctuated by the alerts of incoming calls. Parker leaned back in his comfortable chair and eyed the clock.

He lifted a hand to Kevin Oaks in a lazy gesture of greeting as the man, his relief, came in through the door of the “vault” and meandered towards the coffee maker on the table in the corner.

Right behind him, though, Parker’s supervisor Annie Klein burst through the door, resembling a squat lead ball fired from a musket. An old, not well taken care of musket. Her arms, pudgy bowling pins topped by raptor claws of fingers, clutched her iPhone and a thick pile of official manila folders.

Avoiding eye contact, Parker sat up and spun around to more fully face his row of monitors. His conversations with the indefatigable Ms. Klein inevitably ended in a poor fashion. He’d already earned two written warnings for insubordination, and HR had informed the union that he was currently under investigation. Yay.

He couldn’t afford to lose another job. His pension and retirement benefits were closely tied to his employment with the city. After how he’d left the department, getting fired from this job would vastly reduce his options. Besides, when the factories had closed down and moved to Mexico, they’d taken the greater part of employment options with them. Try as he might, he couldn’t see himself working as a barista, jumping to fetch absurd coffees for uppity IT techs half his age.

He sighed. “Because I’m old,” he muttered.

An indicator light blinked on. He moved his foot and nudged the pedal, opening the line.

“Please help!” a young woman’s voice cried into the line. “Please help, something horrible is going to happen!”

“Calm down, miss,” he said. “Let me help you.” He’d taken enough calls by now to know whether it was the real thing or not. This felt real.

Automatically, his voice went down a register, sliding from gravely baritone to an almost basso profundo. It was a habit left over from working domestic disputes and suicide interventions as a law enforcement officer. It helped in his new career.

His eyes went to his screen and he quietly cursed. She was on a cell; the caller locator software had the 812 area code, but that was it so far. He could have figured that much out on his own by her southern Indiana accent alone. Go Hoosiers, he thought.

“They’re going to do something at Stapleton Mall, the Church!” the girl half-sobbed.

He winced internally at the location, the reminder of his daughter, but pushed the feeling away quickly. He possessed an instinct, a residue left over from working patrol. This girl was fighting to hold it together; he could hear it in the timbre of her voice. She wanted to be brave, she was fighting to be brave, but she was utterly terrified.

“They’ve already killed a girl… I guess you’d call them a cult,” she went on. “But the Church kidnapped me, and Casey, Jesus, they killed Casey!” The words burned through the signal into his ear and he heard the raw anguish and terror in her voice.

Parker’s stomach clenched. This was no hoax.

He eyed the caller ID screen—nothing. Goddamn satellites. He frowned. He inhaled through his nose, calming himself. Since Sara had disappeared, such actions were only effective at work. Outside of the call center, it took Ativan, 4mgs at a time, to calm him. Usually with a Steel City Lager chaser. Sometimes something stronger.

“Tell me your name,” he repeated. His voice remained steady, calm. He might be all this girl had until he could dispatch officers to her 20. He didn’t want to fail her. Didn’t want to fail another girl the way he’d failed Sara.

I am an avid reader and paper crafter. I am a mom of 2 children, 5 dogs and 1 cat. I am a huge St. Louis Cardinals Fan
View all posts by fredreeca →
This entry was posted in Book Spotlight, giveaway and tagged book spotlight, giveaway, guest post. Bookmark the permalink.