My two books of short stories, “The Old Turk and Other Tales” and “Through the Mirror”, examine that tricky balance between experience and the Otherworld. Short stories should stimulate thinking—they are always true. So many of them lose themselves in the usual earthbound stories about romance and the twists and turns of people in love, but I tried to go beyond those confines to involve spiritual worlds. The short stories I wrote are phantastic in the sense that they treat the unseen as a vital encounter, but engage with it as a possible extension of the Self. The stories don’t tell you what to do. They are meetings with vibrant beings, ways of seeing. Some are fun, like the story about hats. I also call to mind the ancient goddesses and what they represent. This is about memory and about the sea. I explore Europe and ancient places in Ohio, U.S.A., and what they represent, the unusual, the dialogue with them that can create connections, letting go the mundane, the things you are used to. I hope there is pleasure in the mind’s adventures.

What I liked most are the stories of transformation in “Through the Mirror”. The metamorphosis does not have to be into human lives, but can be a bird such as in “Jenny Wren”. Or it can have a message as in “The Owls of Scarba”. And then there are some places that simply evoke the moon and thinking in different ways of where you are, such as in an eighteenth century tower in Dessau, Germany, or in a long forgotten village in Austria.

“The Shaman Birches of Argyll” and “The Travelling Moon”, my poetry books, on the other hand, are grounded in living and sailing on the West Coast of Scotland. They are an exploration of nature and lochs and birds, indigenous or those that visit. They are my encounters. I think about them and try to find them again in words. I was born in the land-locked—except for the cross European river Danube—city of Vienna. My books of poetry are probes of the new countryside on a big Celtic island indented with water—the mysterious sea, the rising moon, the trees and ferns that grow wild on hillsides. The essence of the poetry is myth and place. Nature has different dimensions and I want to bring them close. Poetry gives feelings and vision in versions that other genres cannot.

My books are all available from Amazon as Kindle or print-on-demand editions under the name Joanna Paterson.

It is wise to hang a mirror in the darkest corner of the darkest room. It will catch the light where it shines least. It will suck in the remaining light like a waterfall. The light tumbles down into the deep, dark space, the dark side of the mirror. Like the dark side of the moon, the most beautiful light gathers and meets there. Put the book down on your lap as you sit in the room with the mirror and look up. The room is painted in oxblood which means it has a mauve sheen. The deep colour brings out the pictures. They lift from the walls. They circle the room in measured leisureliness. They know they are the artworks that last; but the mirror enthrals them because it has stories in it. The white hand-made paper in one frame shows the big rust-coloured fishing vessel that lists towards the stonebuilt quay. The coal steamer is tired-looking. The wood creaks; it has not been caulked or cleaned. It was painted a loving bright red once with a blue arrow decorating its prow. The blue has washed out. The red of its funnel is rusted. The fine black paint of its pilot house is slashed in peeling greys. 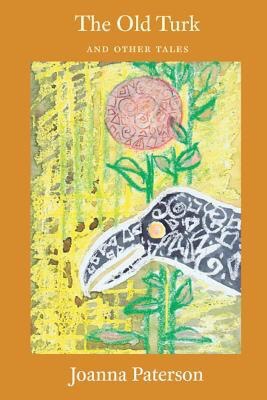 “It’s an intriguing set of prose pieces, almost epigrammatic in parts, and rather strange in an individualistic way. It took me a while to get used to the narrator’s voice and tone, and I feel it’s the type of writing that one’s unlikely to absorb at a single reading – which is no bad thing” -Dr Peter Boehm, on The Old Turk and Other Tales

Writing has been the major part in her life for decades under her academic name, Professor Joanna Geyer-Kordesch. She has worked for many academic publishers writing scholarly books and articles. She was Head of the Wellcome Unit at Glasgow University, the first woman to be entrusted with the history of medicine as an acknowledged field. There were few other such Units at the time. Her specialty was the Halle an der Saale physician and proponent of body and soul unity, Georg Ernst Stahl. Although he died in 1734 his legacy can still be detected in the accent on emotion and feeling in the Romantics.

As Joanna Geyer-Kordesch she also wrote the history of the Glasgow Royal College of Physicians and Surgeons and other prominent institutions in the history of medicine. She then turned to landscape gardens in the eighteenth century as a new subject of study. As she is bilingual she published the diary of the Duchess Louise von Anhalt-Dessau when she visited England in 1775.

But since her retirement she has joyfully left behind the restraints of academia and published poetry and short stories, entering a new world. She was born in Vienna, Austria, thus adding visions to her work not often met in conventional stories. These amount to surprises and unusual places to be delved into. “The Old Turk” harks back to many meditations all over Europe. These stories are an exercise in imagination.

I am an avid reader and paper crafter. I am a mom of 2 children, 5 dogs and 1 cat. I am a huge St. Louis Cardinals Fan
View all posts by fredreeca →
This entry was posted in Book Spotlight, Guests posts and tagged guest post, spotlight. Bookmark the permalink.